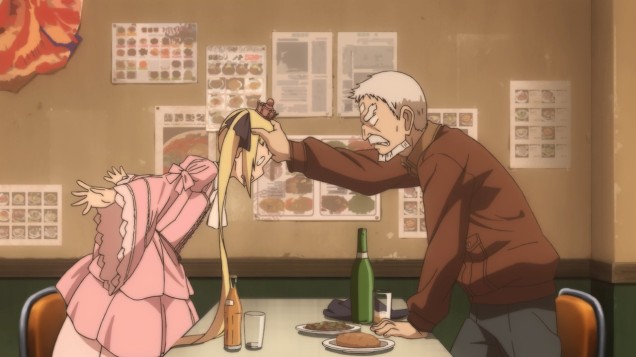 Alright! It’s time for round two of the Spring 2017 previews, and already I’m starting to lose patience for the shows. This second batch of misfits has been pretty much fifty-fifty, half of them being okay, and the other half just downright infuriating. So for this entry we’ve got gadgets and gears, goths and florists, time benders and forget-me-nots, and… puppy love?

Yeah, that last one came out of nowhere. Anyway, enough chit chat and let’s DO THIS!

I think I need to explain myself here, first. The only reason I got interested in this title was because I collect watches — so the prospect of watching a sci-fi show that revolves around a planet that is essentially made up of gears and whizzing balance wheels set my heart aflutter. Come the pilot episode of Clockwork Planet, however, and my expectations were pretty much shot to pieces. This show basically features some of the most generic, practically inane sci-fi setups one can expect from mainstream Japanese novellas-turned-anime. It pretty much fills the checklist for everything “necessary” in order to create just another slipshod iteration of what can be considered a tired genre trope. There’s the noisy, hyper-aware adolescent protagonist that meets the stoic robot girl that literally falls out of the sky, who ends up serving said protagonist in a master-servent relationship. Throw in some sexual innuendoes, young detectives, wardrobe malfunctions, and shiny robots with guns and you have yourself the mess that is Clockwork Planet.

On top of this poor excuse of a plot is the show’s inability to present a narrative worth caring for. The dialogue is awkward, with an obvious agenda towards fan service, including the essential robotic-like speech of robo-girl with the ubiquitous “master” appendage flanking every utterance. The character development is also so heavily dependent on established tropes that I feel little to no emotional investment in the events that seemingly shock all of the characters on screen. All of this, combined with an overly dramatic musical score and janky animation, and that’s the beast we’re dealing with here. It was literally a chore for me to get through this first episode, which is more than enough for me to handle at this point. Sorry, but not sorry. This was just bad.  Initial Rating: 3/10

What do you get when you cross Elfen Lied with Sweetness and Lightning? I honestly never thought I’d see the day when I’d even ask something as ridiculous as that — and quite frankly, that’s the sort of predicament I found myself in after watching the extended premier episode of Alice and Zôroku. The show basically talks about the story of a young girl, Sana, who escapes a top-secret facility that seeks to exploit their powers. It’s a very typical sci-fi setup that we’ve seen in many other shows like Terror in Resonance and, heck, even the Bourne Identity to some extent. But where this show throws a wrench into the established formula is in its introduction of Zôroku, an old florist who basically won’t take any shit standing up.

Which means this show is pretty much like Mikoto Mikasa from A Certain Magical Index suddenly walking into a slice-of-life. It’s an interesting mix in so far as it grounds the sci-fi and almost throws in a little bit of meta-referencing to question the genre in and of itself. But perhaps what sells me on the whole production is the highly competent direction, which utilizes a lot of indirect framing and incidental dialogue. It’s quite difficult to find anime that doesn’t rely on exposition, dialogue, and narration too much — and so it’s refreshing to see a show that actually exploits the medium of animation to the fullest. But my excitement on that front is watered down by the god awful CG.

The other beef I have with this show is the excessive use of violence as a comedic interlude. I understand how this breaks the tension between the sci-fi and slice-of-life aspects, but seeing an old man skull crush a prepubescent girl in goth isn’t exactly the best of images to fling around as often as the show did in this first episode, alone. It kinda reminded me of Kyôma from Dimension W and his penchant for physically and verbally abusing Mira like it was nothing. But unlike Kyôma, Rôzoku’s distancing has much to do with his innate personality and low tolerance for bullshit. In fact this entire episode did very well to develop Rôzoku as an honest person with an intact sense of justice. The same can’t be said for Sana, however, whose motive and overall stance in the general conflict seem to be lost to me. But that’s definitely something the show can work on over the course of its run.

So yeah, this is a very odd show, but given its production notes and overall feel, it feels like a good bet to run with. Hopefully, it can turn into something special.  Initial Rating: 7.5/10 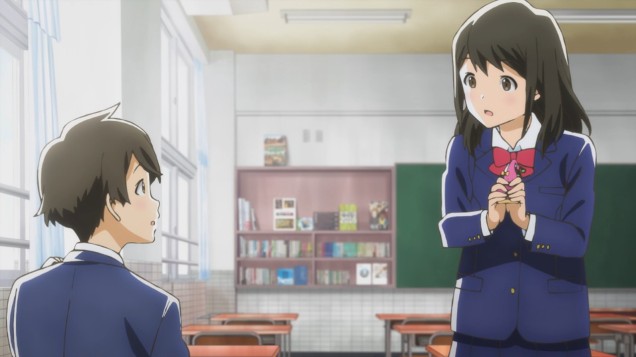 Romance shows generally tend to sell themselves by virtue of their eccentricity, either playing the overly dramatic card or simply throwing it out of the park with unsuspecting themes like in Scum’s Wish. But Tsuki ga Kirei is perhaps as mundane as you can get when it comes to depicting what can essentially be summarized as “the story of my first crush”.

But perhaps what sells me over on this show is how natural it feels. That’s the best word to describe this entire pilot episode — it’s just so natural. The awkward silence sprinkled with almost inaudible squeaks from a tongue-tied Akane, to the uncomfortable weight shifting and wayward glances of a bashful Takumi — everything is executed so naturally that it breathes an air of authenticity that makes its story all the more engaging. Granted the premise is established as early as the first few frames, the scenario is mundane enough to be relatable. For example, the family restaurant scene with Akane and Takumi’s parents basically embarrassing the crap out of the two is something I’m pretty sure we’ve all experienced at one point or another as teenagers. And I really resonate with Takumi when he went with iced coffee instead of Fanta in a bid to express his “matureness” to Akane. It’s these small bits of indirect framing that accentuate the awkwardness of being together in the same space as your crush, elevating what is otherwise a mundane story about two youngsters realizing their feelings with one another into a relatable experience with the viewer.

Almost everything is well polished in this premier episode, save for the unwelcome CG background “ghosts”. Otherwise, I’m just so happy to see a title this season that I’m actually excited to watch. Granted this might not be the kind of show for everyone (it definitely has no bite to it, as far as romance is concerned), if a slow-paced, easy-going romance toots your flute, then I say go for it.  Initial Rating: 9/10 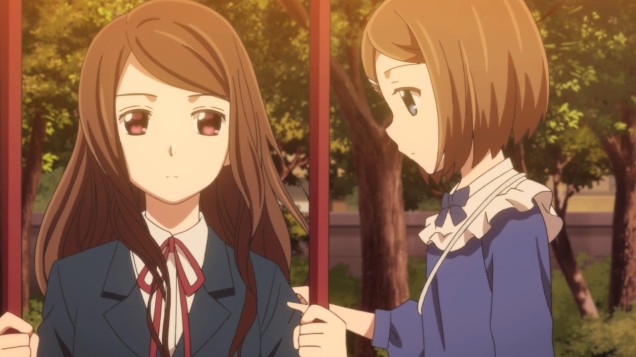 If Tsuki ga Kirei was a good example of what a natural sequence of events and dialogue are like, then Sagrada Reset is perhaps the polar opposite. Set to the tune of high schoolers with special powers, ostensible protagonist Kei teams together with the highly stoic Haruki and enigmatic Sumire in order to solve mysteries that occur in the singular town of Sakurada, wherein people with these said superpowers are said to exist. It definitely isn’t the most inspired of titles, but what makes this show even more unbearable is how unnatural the dialogue is. It’s almost as if puppets were vomiting out lines that don’t even make any logical connections from one movement to the next. This is combined with mediocre visuals that don’t even carry the weight of uttered lines to make any meaningful visual metaphors.

For example, one segment had Sumire and Haruki discussing a story regarding a real and fake individual, and a moral question as to which of the two was more upright. The entire sequence had them voicing over random shots of the city of Sakurda, which failed to make any meaningful connections between the spoken words and the intended delivery of the speech. This is the reason why shows like Bakemonogatari and March comes in like a Lion go to the extent of using visual metaphors to help animate the words into something visually tangible. Absence of this makes for disjointed images that convey basically nothing.

And its this lazy directing that gives me little interest in the events that unfold on screen. The final sequence was meant to evoke some sense of suspense, supposedly hoping to segue into the next episode — but quite frankly, I feel no connection to the characters to even care about them anymore. It’s like watching a bunch of dolls act like humans — utterly pointless.  Initial Rating: 4.5/10

I think I might have let out a little steam on top of sharing the previews for this batch of titles, but that’s the beast we’re faced with this Spring 2017. There are still quite a number of shows to plough through, so here’s hoping we find at least something a bit more interesting to keep us occupied this season. Because as it stands, things aren’t looking all too good.