I finally re-hooked up my streaming server at home, as well as my pre-amp setup connected to my headphone and box speaker setup… and it’s beautiful. I swear, nothing beats watching animu on a 40-inch HD-TV.

Anyway, side-projects aside, this is a little late because one title airs every Sunday, but I’m kinda wondering if it’s worth keeping it around given it isn’t really doing much for me, to be honest. Of course, I’m talking about a certain show that’s going up on Netflix next year, which seems to be a common theme with regard to western-sponsored anime projects. I don’t know if it’s because people have weird tastes, or if I’m just being a little too pretentious. Probably both.

Anyway, [Side B] is decidedly more jam-packed with heavy hitters, which seems to be the case with most of the seasons I’ve written about. There always seems to be one side that’s a bit more engaging than the other — and without a doubt, this season’s bias lies heavily towards [Side B]. So yeah, without further ado, let’s run down just what happened last week!

I’m at a loss of words at just how beautiful the production of The Ancient Magus’ Bride has been up to this point. Chise’s journey throughout this flip-side world of magic is, indeed, framed as somewhat mystical, but the show maintains enough nuance to maintain a certain amount of respect for the sort of character Chise has become at this point. Her longing for death as peaceful as that of the dying Uil is a poignant reminder of the wretchedness of her own lived experience, and that Elias’ own good intentions (whatever they may be) aren’t enough to erase the sort of past that she’s had to endure. Indeed, it’s something that she has to live with, and the dramatic framing of these past few episodes does well in giving us nice bits of information about her traumatic past without necessarily spoon feeding the audience in the process. It’s this sort of nuanced storytelling that truly sells this series for me; a mixture of melancholy and beauty that is matched by the brilliance of its atmospheric visuals and music. I know I mentioned some other show as being a strong contender for best show of the season, but man things just got a bit trickier. 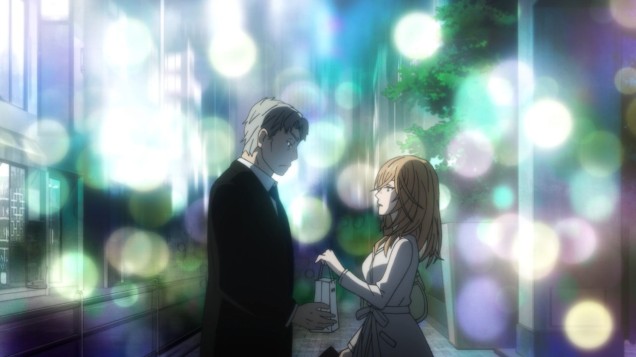 I’m gonna save much of my comments for a separate entry for this series, but suffice it to say that the show has been stellar in maintaining the charm that has made it such an excellent show in the first place. This particular episode was a bit noisy at the start, but we finally address the elephant in the room that is Kyôko’s twisted relationship with Gotô — something that’s been nagging me since the first season. Complicated domestic situations aside, Gotô is quite the walking contradiction in that he unwittingly welcomes Kyôko’s affection whilst still having some attachment to his comatose wife; this contrasted with Rei’s own paradoxical view of Gotô as both a defender of Shimada and oppressor of Kyôko. But Rei shows some sense of an earned maturity by remaining calm amidst the noise running inside his head, choosing instead to decide whether or not he should like or hate him. This makes for an interesting sort of segue, as the question is directed back to us, the viewer, when we are met with the sort of relationship that Kyôko and Gotô actually have. There are only so many times when March comes in like a Lion decides to take a departure from Rei’s point-of-view, so here’s hoping we get a bit more from Kyôko’s side.

It’s nice to see the inclusion of a guest character as a sort of thematic anchor point. Kanazawa is interesting in that he represents a relic of a bygone era where “purpose” was defined by one’s role in society. More specifically, he represents the modern day workforce wherein one’s worth is tantamount to the sort of impact they have on society. But the world of Shôjo Shûmatsu Ryokô lacks societal structures that provide meaning to activities like creating maps or taking pictures. It’s this existential sort of crisis that makes Kanazawa seem both pitiful and dubious — and so the show goes on to use deceptive framing throughout this episode to make us believe that he is, indeed, planning something sinister against the girls. But I’m somewhat happy that the show decides to keep Kanazawa as an honest-to-goodness man who just simply wants to make maps. His is an earnest pursuit of passion that helps define his existence rather than justify it. It’s this faith in humanity in a world gone to heck that makes this episode far more endearing than the episodes that came before it. And when Chito and Yûi show an effort to save the life of a man they initially viewed with suspicion — to the point of risking their own lives, as well — it just goes to show that humanity and society aren’t so easily turned upside-down by things such as “being in survival mode”. In fact, the girls are quite simple-minded in that regard. “Why do people live?” Chito asks, to which Yûi whacks her on the head calling her “crazy”. Why question your existence when you can live it? Quite similarly, a person wants to die after losing a bunch of papers — the girls call that crazy. It’s probably obvious to us as viewers, but it serves as a poignant little reminder of the nature of growth through trial and error. We can get depressed over each minor setback, but we shouldn’t forget that failures don’t invalidate our existence; rather, they enrich our journey towards self-actualization in a seemingly pointless existence. I guess you could say I’m quite impressed at the sort of micro-lessons this show is teaching us so early on in its production. It really is quite something. 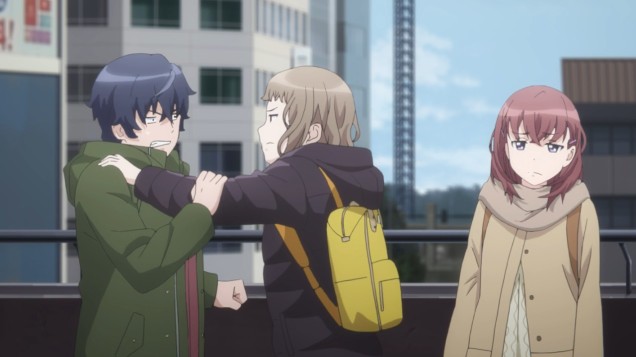 This week’s episode of Just Because! felt a bit more “noisy” than those that came before it, but at the very least the character dynamics remain charming. I think the honeymoon period of me warming up to what is essentially a budding teen love-polygon is starting to wear off, but at the very least, the production notes are still remaining on point. And to some extent, this has triggered a slight bit of anxiety on my part, since I feel like the story elements need to start kicking in lest I start getting bored of the sort of story its trying to build. The intrigue behind Eita’s unexpected reunion with former classmates is starting to wear off, so the show might want to consider turning up the dramatic tension a bit if it wants to keep things interesting.

Recovery of an MMO Junkie (Ep.3)

I think it’s a bit misleading to classify this show as an isekai show, now that it’s clear that the use of an MMO is just a setup for the romantic comedy that is the gist of the entire production. You can pretty much say that the MMO, itself, is the modern-day equivalent of a chatroom, which serves as Moriko’s link to being more like herself with her online persona. And alienation in the workforce isn’t a new thing — it’s an issue that’s been around for quite some time — but that doesn’t mean it isn’t relevant. If anything, my only concern for this show is how things are starting to feel a bit contrived now that everyone has their eyes on Moriko. I mean, first it’s Sakurai elbowing her mid-strut, then it’s “Mr. Hot Stuff” trying to play it cool with her by giving her a random nickname over the phone; but wait, then it’s the guy at the cash register who just can’t keep his eyes off of her. Men fawning all over the main heroine seems a bit excessive, even for a love comedy, but whatever… I’m still curious to see where this show will take its cast moving forward.

Children of the Whales (Ep.3)

There are quite a number of problems with this show. For one, it just played the genocide card, and I can’t help but feel indifferent to everything since there’s a lack of balance in the exposition for me to even get a sense of what the violence on screen is supposed to mean. I don’t feel invested in the events, and the number of characters that were killed feels excessive if only to drive home the point that something big is going on in the outside world, but we don’t know what! The storytelling and pacing at this point feels practically juvenile — and it’s a shame because everything looks so beautifully polished. I’m giving this show one more chance to prove to me that it’s actually worth watching. Otherwise, what a shame.

Whew, that took longer than expected. Any shows you’re watching that are here on this list? Do share your comments below! Until next time, ciao!