Joker Game started off with the premise of pre-World War II Imperial Japanese spies as framed through the interactions of the D-Agency with a traditional Japanese soldier, Sakuma. Episode three, however, takes a departure from this formula and enters into specific character vignettes for each of the eight spies introduced. In a way, this was a good approach since the sheer number of spies present in the show (eight in total) would make for a messy task of balancing out character development. Focusing on individual spies means getting self-contained stories that capitalize on their own unique abilities. The only problem is that I can’t remember for the life of me who is who in this spy-filled show…

But it doesn’t really seem to matter if we remember their names or not. Each of the eight spies was introduced using a pseudonym in the first episode, anyway, and it doesn’t seem to be the point so much as making it clear that there are, in fact, eight of them. Plus, their character designs are pretty generic and unassuming — undoubtedly a characteristic of a spy — but stylized enough to make them distinguishable. I honestly can’t half-ass myself to remember all of their (fake) names, so I might as well just call them “spy-of-the-week” for the sake of simplicity. 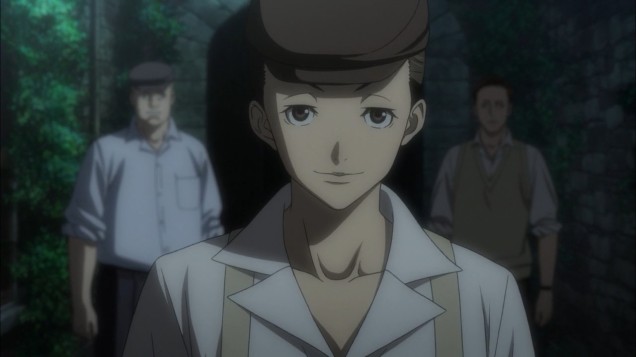 But despite this glaring flaw in characterization, it turns out that this “de-personalized” presentation for the show’s ostensible leads adds to the whole mystique of the spy drama. Growing up in a generation of spy films that were glamorized with fantastical gadgets, fancy tuxedoes, and sexy starlets, I found this sense of subdued anonymity to actually work in favor of the show. For this episode, we find ourselves transported out of pre-World War II Japan and into France at the time of the German occupation in 1940. A resistance has been brewing out of discontent in the political situation, and our spy-of-the-week is purportedly sent over to gather intel regarding the total number of resistance members. But during his mission, he unexpectedly sustains a blow to his head after attempting to stop German soldiers from executing an old French woman who, apparently, threw a rock at one of them. The concussion renders the spy’s memory hazy, but he is serendipitously picked up by members of the resistance who thank him for saving the life of one of their countrymen.

In a way, the story seems less a question of plausibility than it is, really, a showcase of what it takes to be a spy. Even though his memory was hazy, his own subconsciousness, which was represented using the spy obscured behind a purple mist, kept him from revealing his role as a spy or spilling information about himself. It might have seemed a bit too implausible — even Commander Yuuki is shown teaching the spies in a flashback that they can be made to train their subconscious to remember their own mission objectives — but Joker Game seems to bank on these seemingly autistic savant-like abilities to make the spies feel like super humans in their own right.

Outside of those unlikely bits of spy characterization, the episode did well in showcasing the ingenuity and cunning of its lead. Making a dust bomb out of flour and a bellows was a smart use of “spies can make a bomb out of anything”, and the additional bits of tactical planning from our spy-of-the-week gave this episode a good amount of heft. There was even a part where our spy asked one of the members of the resistance a question regarding the condition of a gun that was supposedly broken, her answer of which allowed him to deduce the fact that she was actually a German spy. This smart use of dialogue and well-timed action sequences gave much of the episode grip and substance, weaving a very pleasing self-contained spy drama vignette, even at just 24 minutes in length.

As it stands, Joker Game is playing a consistent game, but it will have to up the stakes if it wishes to maintain this level of polish without inadvertently becoming redundant. At the very least, much of my concerns regarding its execution were answered with this episode, and I have no doubt that I’ll be enjoying the show for the entirety of its run. It might feel a little slow-paced and subdued for people used to more gripping scenes of spy drama/action, and its characters might not home in on our emotional radars as deeply as they should, but I believe this show is focused more on presenting character vignettes with an added air of mystique and intrigue. It’s a very different kind of spy drama show in that regard, but we’ll have to see what other stories these spies have to tell before we can make that verdict.