Spring has finally drawn to a close, and man was it crazy. I burned myself out half-way through the season, and apparently so did the CR staff handling the newsletter. As a result, NONE of my articles were ever published this spring, leaving a bitter taste in an otherwise enjoyable season. But my “enjoyment” was only to the extent that the shows were pretty much there to fill a void. It certainly wasn’t as dismal as the winter season, which only had one or two titles which I could consider worthwhile. But at the same time, Spring 2016 wasn’t exactly what I would call stellar, either. Sure, I was quite delighted mid-way through to have a pretty good spread of titles, but as the season dragged on, things began to stagnate. In the end, majority of the shows were pretty ho-hum with one ending up in the “dropped” category on its final episode before proceeding on to a double-length cour (which I’ll get to in a bit). So after all is said and done, though nothing was really “bad”, nothing was all too memorable, either.

So just what happened this season? Let’s run down all the titles, season end ranking, from worst to best! 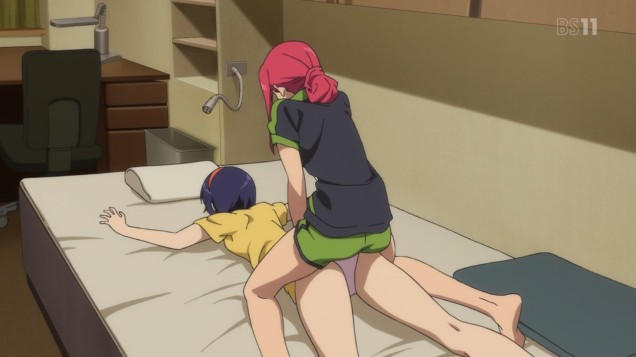 I had high hopes for this show given its impressive animation notes, but that’s about it. I ended up dropping it after 13 episodes as a result, and I have no interest on finding out what the second half is going to be like because this last episode gave me little reason to do so. In fact, it seems to be a pattern as to how well the show can create episodes that basically accomplish nothing. Another turn off was the goofy villain cast that seemed so one-dimensional, as if they were taken straight out of a noontime sendai show– ugh, I don’t even want to think about where the hell this show is going anymore. Final Rating: 5/10

#10 – Kabaneri of the Iron Fortress

Well, I tempered my expectations for this show given the history I’ve had watching Araki films, and once again he proves that he can create a one-note story that is as formulaic as taking a walk through zombieland. Sure, it was visually beautiful, albeit tortured a bit with inconsistent animation throughout the latter half of its run; plus, it was action-packed and basically fun seeing zombies go kersplat. But loopholes, character inconsistencies, rushed plot flows, and a poorly constructed antagonist made for a shallow show with very little to offer other than the very fun it promises. Sure, fun is fun. But that still doesn’t make it a good story; or a good show, even. Final Rating: 5.5/10

#9 – Re: Life in a Different World from Zero

I know I’ve said I never really like this show expressly because of its protagonist, but I’ll have to admit that it got a bit better come the latter half of its Spring run… But then episode 13 happened and I almost threw up my lunch. This show is so polarizing it scares me to think that someone like Subaru could actually exist in real life. It was refreshing to see Emilia talk him down a bit, but I can’t really say much for a show that only gives me satisfaction whenever its MC’s ego is being beat to the ground. This show isn’t for everyone, and it definitely wasn’t for me. Ongoing Rating: 6/10

If you’ve read my (lengthy) review on this show, then you’d know that I give it props for focusing on character development, which makes for a rather endearing cast. But this is at the expense of an otherwise convoluted plot and underwhelming battle theatrics. This show could seriously use a lecture on how to capitalize on the use of impact. Not to mention, the show concluded its Phoenix Festa arc a little prematurely, making the remaining episodes seem a little out of place and rushed. I don’t know if a third cour is in the works, but this show’s strategy really needs to be rethought. I honestly think it’s a pretty cool series, but these expectations are watered down by the show’s less than stellar choice of presentation. Final Rating: 7/10

Kiznaiver is basically one of those shows that tries to explain something we already intuitively know. That said, the last episode basically felt underwhelming and unrewarding despite a legitimately engaging dramatic sequence of events throughout the second half of the show. Okada seems to lack a bit of follow-up when it comes to reconciling her little thought experiments. I can’t blame her, though. It was a great idea, but when your answer becomes something along the lines of “we long to understand one another”, then the entire roundabout means of getting there starts to feel a little tedious. Final Rating: 7/10

It’s difficult to place this show in sixth place given I actually enjoyed it quite a bit. Unfortunately, other shows had more impact on me, which left Joker Game a little “hidden” under the shadows of more engaging titles. Don’t get me wrong — the ideas and introspection into what it means to be a spy were excellent. Even the last episode’s take on the “exit” from spy-dom was pretty shrewd, recapitulating the descriptor of the D-agency as a group of “monsters” in contrast to a man who can’t rid himself of the warmth of humanity from a distant memory full of love. Unfortunately, this show is what it is — a specter of sorts that could easily be forgotten as just another title that was good, but not good enough to have left a distinctive impact on its viewer. Final Rating: 7.5/10

“Ho-ho! Le wild show appears! Waitaminute, didn’t you say you stopped watching this thriller wanna-be? And you seriously rated it HIGHER than Kiznaiver?” is probably what you’re thinking. Well, I did say I’d continue watching it for kicks, and as a result — yes, it did remarkably well when I stopped looking at it as a thriller show. Okada’s choice of twist for this show might seem a bit comical, but the underlying message was actually quite poignant. The final choices of the various characters actually did justice to their own unique idiosyncrasies, which maintained a certain level of consistency and relevance that measures up to the real-world. It’s surprising, I know, but yes. This show had a much, much clearer message that actually made sense as compared to Kiznaiver. It certainly wasn’t as pretty, but pretty isn’t everything when it comes to telling a (quirky) story with a legitimately solid underlying message about how we deal with our own traumas in life. Final Rating: 7.5/10

The second cour of Concrete Revolutio probably wasn’t as propulsive as the first, but it was still full of wonderful reflections on the nature of justice and the conflicting ideologies that claim to uphold it. It’s a translation of the ideological revolutions of the 1960’s in a modernist setting, making us realize that a lot of the struggles of defining right and wrong still exist today. This final episode’s direction of symbolizing justice as a spirit that transcends time and space is a painful but hopeful reminder that peace may not be attained during our lifetime, but it is still something worth striving to achieve; if not for our sakes, at least for the sake of the generations to come. Final Rating: 8/10

This show is just so much fun. It’s probably a cult animation, but Macross Delta has consistently shown throughout the first half of its run that it can be fun, dramatic, uplifting, endearing, and engaging all-in-one. It’s a wonderful balance of epic proportions, set to the tune of intergalactic warfare and pop idol fandom. If that doesn’t get your heart racing, then I don’t know what will. I’m more than happy to see this show have a continuous run throughout the entirety of the Summer season. Ongoing Rating: 8.5/10

I just love this show. Superhero stories tend to be very formulaic, but MHA consistently highlights its worldview on heroism and creates for itself a very endearing main character to which we can all relate to. His innate sense of heroism calls out to all of us, sending out a hopeful message that everyone can become a hero. It was a little sad to see this show split its run, and given the impact of its message, the whole 13 episodes felt like the plot was dragged out far longer than it should have been. But that still doesn’t lessen the experience of watching this great show. Final Rating: 9/10

I really wasn’t expecting this. I had to think long and hard whether or not a slice-of-life would actually make sense as best show of the season, but no matter how much I wrapped my head around it, I couldn’t think of anything to complain about this show. It is just so beautifully magical without needing any particularly magical devices to get its warmth across. Though the last episode began to show more out-of-this-world sequences, the “spell” that was cast earlier on in the season made it feel like nothing too different from mundane. Magic is in the mundane in this show, and the magical becomes mundane. That’s the kind of power this show has. Beautiful. Just beautiful — and this season’s number 1 show! Final rating: 9.5/10

Man, Spring 2016 really was a weird one. Summer has already begun and the shows are starting to roll out. I’ll be bringing out a bunch of previews as the shows come out, so please stay tuned!