The shows just keep coming! For this preview, two Visual Art’s/Key shows, more OP teens, and dancing puppets. Yes, that sounds very weird, but that’s exactly what this season is shaping up to be — weird and markedly divisive. Oh well, let’s break it down! 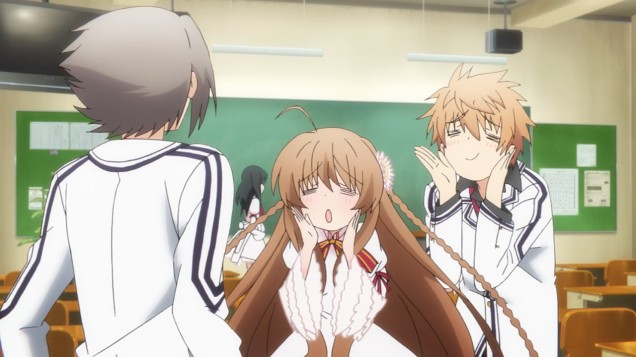 It’s been a while since I’ve watched anything that was based off of a Visual Art’s/KEY visual novel, but I don’t recall them ever being this kooky. The brand has seen better days with memorable titles like CLANNAD and Kanon. The more recent titles like Angel Beats and Little Busters were either divisive or overly esoteric. Rewrite seems to continue that trend of eccentric storytelling that makes me wonder if it’s just me growing out of stories like this or just the brand being its good ‘ole self. For one, it plays off like a direct-to-anime version of the original visual novel, meaning it painstakingly has to do the mandatory introductory scenes of all of the heroines, complete with an overly outspoken, sometimes self-aware, protagonist. Tenouji, at the very least, seems to be a pretty lovable MC, but much of what I’ve come to remember about any Visual Art’s/KEY work is blatantly on display — from the excessively frilly female costumes, to the cookie cutter/photo-copier/multiplicity/what-have-you appearances of all of the female characters. If it weren’t for the silly antics and sometimes off-putting humor, I would have stopped midway through the extended first episode. But it’s for nostalgia that I try to digest the weirdness the show has to offer, even if that means wondering if this show has anything to do with shows like Myriad Colors Phantom World. I really can’t make heads or tails what the heck this show is trying to accomplish, but so far, it’s just covering the necessary bases for any Visual Novel-to-Anime knock-up — and that isn’t a very good place for this show to be, honestly.

Planetarian ~the reverie of a little planet~ 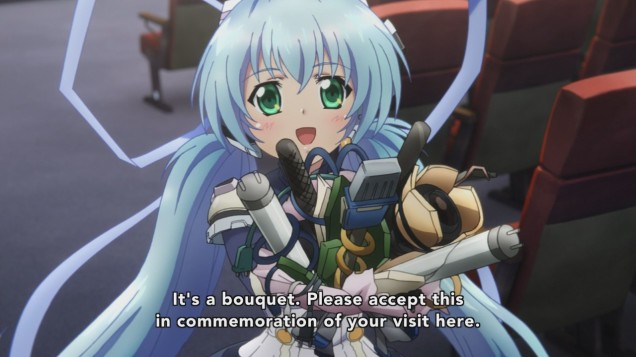 Unlike Rewrite, Planetarian actually does things right by introducing a rather intriguing story about an android/planetarium curator left behind in a post-apocalyptic world and her interactions with a bounty hunter seeking shelter from the rain. Not only does Planetarian abandon the signature style of Visual Art’s/KEY’s tendency to make all of its female characters carbon-copied-cute, it does a full 360 — adapting a dull color palette of olive drab and slate grey. The only thing colorful is our resident android who is decidedly “cute”, but it works insomuch as you feel a little sorry for her in her given situation. There’s a charm to her innocence, and how this rubs off on a callous man who has more to think about than look at a false projection of the night sky is an interesting thing to see. It’s easy to call off his humoring the robot as a play on “robot love”, but I believe there’s a more fundamental longing that begs the man to pay attention to the robot — a certain amount of humanity that seems lost, not just to him, but in the very post-apocalyptic world that he inhabits. And for that, Planetarian makes a stunningly simple but heartfelt first episode, giving me high hopes for this understated Visual Art’s/KEY work. Too bad that it’s only going to be a few episodes short, but that only makes me hope that each episode will be an episode well spent.

Well, it’s another post-apocalyptic setting, but this time with more overpowered teenagers taking on the role as “the only group of people that can save us from teh [sic] aliens.” It’s kinda tiring to have to see how many shows of this format you can make, and it doesn’t help much that get an Asterisk Wars vibe from the whole production. And that means a very stale bunch of sequences that lacks impact despite having pretty awesome superpowers. To cut things short, there is just nothing really remarkable about this show to make it even remotely unique, other than the fact that it sports a very stuck up MC. I dunno, maybe I’ve had it with A-1 Pictures’ hit-and-miss antics, but I honestly don’t feel like giving this show the chance I did with Asterisk Wars. Too bad.

Okay, this isn’t an Anime, but I saw Gen Urobochi as scriptwriter in the credits, so I said “screw it”. I did a little research and discovered that this was actually a Chinese webcomic or something adapted into what you could probably call a modern day Bunraku. Yep. It’s a live action played out with dolls. It sounds stupid, but watch it. Or at least endure it. I’m pretty sure half of you out there will probably not want to continue watching this show, but for those who actually find it amusing, it’s actually pretty cool. It’s a very basic “Ronin saves damsel in distress and ends up fighting army of darkness” kinda setup, but I’m enjoying the classic Chinese Epic vibe to it. The choreography is also quite stunning given they’re using dolls, and though the special effects and music tend to border obnoxiously overdone, it has its own charm. The only gripe I have with this show, really, is that I wish it were in Mandarin dub. Other than that, it’s a very unique show. I highly recommend it if you feel like watching something a little different than the usual this Summer season.

Whew, we’re reaching the end of the previews. I have a couple more shows to watch, and then it’s back to the week in review posts. Let’s hope I don’t burnout/combust/die along the way. Till next time! Ciao!