Wait, what year is it?

No seriously… This season is filled with sequels and re-calls from seasons long passed… it’s almost like looking at the cinemas and seeing Beauty and the Beast, Mighty Morphin’ Power Rangers, and Ghost in the Shell innocuously lined up like it’s no one’s business. That’s basically how the first few shows I watched this season made me feel. So yeah, for this part of the previews, we’ve got mystical girls falling from the sky, ultra-powered humans blasting from the earth, over-sized monsters tumbling across the plains, and tsundere little sisters drawing erotica behind closed doors.

Disclaimer: I don’t play Granblue Fantasy (I was too busy playing the iDOLM@STER: Starlight Stage). Apart from knowing that this is based on a mobile video game, I have little to no background on this story — but I was curious enough to pick it up given I kinda promised myself that I’d watch more fantasy-oriented titles, for a change. True enough, Granblue Fantasy is as “fantasy-esque” as you can get, throwing in the generic JRPG staples of random mythological creatures under the pretext of a greater world of magic and mystery. It’s like a rehash of everything in Final Fantasy with some theme swapping here and there. Granted the art style is gorgeous, with A-1 Pictures opting for the same rough-sketch outlines as was seen in Occultic;Nine.

So we have the story of a generic RPG protagonist Gran who acts like any adolescent youth with a hero complex out to save the damsel in distress Lyria, who seems to be a special being capable of summoning the powers of the ancients. Throw in some death and procedural contract binding and you have the show that is Granblue Fantasy. And that’s not to say that generic RPG plot setting is bad, per se; but a lot is expected if the show wishes to avoid falling into obscurity.

But who am I kidding? This is a show based on a ridiculously popular mobile game franchise that micro-transactions the crap out of your savings account. People are gonna pick this up regardless of how mediocre its first two episodes are, of that I’m sure. But mediocre as it may be, that’s probably just the fault of its genre. The stakes are high, and the story has yet to fly. Here’s hoping.  Initial rating: 6.5/10

Oh yes, it’s finally here. If you haven’t already read my ludicrously long posts on My Hero Academia, then let it be known that I just love this show. It’s easy to dismiss it as “just another superhero show”, but the show’s inherent underdog portrayal of Deku’s rise to heroism is nothing short of awe-inspiring. And true enough, the first episode of the second cour maintains the show’s focus on its core values whilst making effective use of the time to familiarize ourselves with the other members of Deku’s class. This meant a couple noisy segments that brought a bit more color into some of the other characters that didn’t make that much screen time last season.

Despite that, the show’s opening “recap” and otherwise slow progression towards the sports festival arc did raise some worries with regard to the show’s pacing. This has been the bane of this show ever since it first aired a year ago. Whether or not Bones will rally things up a bit will yet to be seen. But suffice it to know that the energy, zaniness, and polish of the original are alive and well in this second cour.

Only one episode in and I feel more than comfortable embracing this show for what’s in store. Bring it — my body is ready!  Initial Rating: 8.5/10

I think I tend to be a person who connects more closely to the director of a series than many others would otherwise be, meaning my reservations for Tetsuro Araki’s style in shows like Attack on Titan or Tetsujô no Kabaneri come in full force. I will give him credit, however, for taking the training wheels off and just ploughing through the first episode with the story as if there wasn’t a four year hiatus between the two seasons. My struggles with name recall and disorientation aside, the general feel of the show is distinct as it is repulsive — a signature trait for Tetsuro Araki, which I believe, suits him perfectly.

Because as far as livid emotions are concerned, no one can top Tetsuro Araki’s depiction of human strife against an overpowered adversary. And that’s because the expression list is a throw between mouth agape or unintelligible screaming. And yes, I’m being very sarcastic at this point, because to be honest, Tetsuro Araki’s strong point is his ability to convey violence in a way that is “just so friggin’ cool”.

But what I think really weirds me out is how satisfied I felt not seeing anything substantial happen with Eren. I’ve always been disillusioned with him as a character — the sort of brazen, fool-hardy youth that seems to be an extension of Testuro Araki’s psyche. This is Seinen territory after all, so the emo underdog is a must. But I digress. This episode was, actually, quite gripping — as is the story in general — and so I have to come to grips with Tetsuro’s style and simply enjoy the story for what it’s worth. At the very least, I can sleep to the fact that the story wasn’t written by him anyway, so he can just focus on making things look “cool” whilst having all of his characters whine the heck out of everything. And in case it isn’t clear, I’m really just having a blast.  Initial Rating: 8.5/10 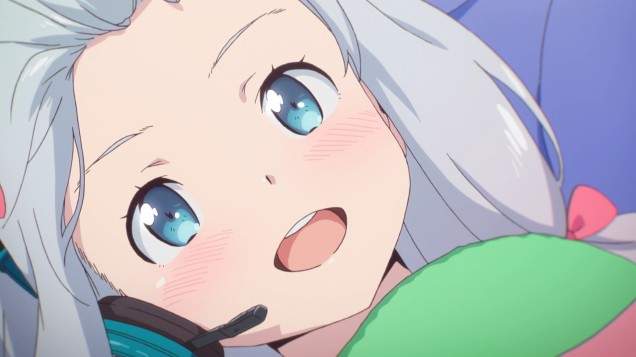 Remember how I said this season seemed to be full of “call-backs”? Well, that’s just what Ero-manga Sensei is — Oreimo ver 2.0. Not surprising given that it was illustrated by none other than Kanzaki Hiro, himself — the same guy that brought us a story about a brother trying to get closer to his tsundere younger sister, only to find that she’s into otaku things and they grow (eerily) close to one another.

It was fine before, and the craze seems to have died off. Now, it’s almost as if we’re trying to beat a dead horse. And don’t get me wrong, I really, REALLY like Kanazi Hiro. He’s one of my favorite artists — in fact the banner on my my animelist page was done by him. The problem is the whole premise of Ero-manga Sensei is obviously mild little sister erotica playing to the tune of a slice-of-life comedy that panders to the people that just crave for little sister-themed shows. It’s a play on a needy persona as exemplified by a younger sister, convoluted further with the controversial nature of its premise. You get imouto, pseudo-incest (because they’re half-siblings, so it’s “okay”), and you get lots of leery shots — go figure.

But damn, why does the artwork have to be so darn good. This show is basically one very shiny turd. It’s beautiful on the outside, but just so empty and full of shit — shit that needs to be flushed away, never to return.  Initial Rating: 4/10