Or week 2-3… I dunno. I’m confused as to when a week starts for this season of shows since there are some shows that have only just started on their second episode, while others are already on to their third. Anyway, I decided to just go with every Monday for a week in review once all shows have had their shows out.

The second week of any season is usually the weeding period. Shows that made their mark on their premier episodes pretty much nailed it again the following week, while those that were a little iffy remained their iffy selves… and then there were those that just bit the bullet and faded off into obscurity. But a couple shows remain wild cards, and probably for good reason. That said, let’s do this!

N.B. – Kabaneri of the Iron Fortress was cancelled last week due to the Kumamoto quake. My condolences go out to the people of Japan, especially to some friends who live in the Kyuushu area.

Flying Witch remained its lovely self this week, complete with a warm atmosphere and a generally bubbly demeanor. This show really does have a sort of subdued feeling to it wherein the concept of “witches” and “spirits” is actually less the focus than it is just that spark of magic that makes this show all the richer. The music is also just so wonderfully composed, it breaths a distinct character into the entire experience of the show, often enhancing the goofy character mannerisms or the overall playfulness of the sequences. There’s hardly anything to complain about in this show, plus this episode features a little cooking lesson! I swear, this is the perfect way for me to end the week, and definitely something I’ll always be looking forward to to help soothe my soul.

Re: ZERO -Starting Life in Another World-

I’m finding it very difficult to take this show seriously no thanks to its protagonist, Subaru. His Otaku-ness seriously has to stop before it ruins the entire experience of watching the show — because as it stands, his silly quips and self-aware monologues about this fantasy world runs along the lines of thought insertion — the type of lines of an outsider looking in to the actual show would actually say. And this sense of distancing makes his observations totally outrageous. The first thing he blurts out after he discovers the time-leap power basically mocks the entire plot, and he goes on to make self-glorifying statements like “A wound to the back is a warrior’s greatest shame” or “I actually get a time-leap ability, and it only activates when I die.” And when he realizes the fact that someone other than himself actually DIES every time he goes back in time, he suddenly gets invested and dons on some sort of “hero” complex. If this show seriously wanted me to believe Subaru’s intentions beyond some egotistical messianic complex, then it needs to stop it with all of the self-absorbed monologuing. Because every time he blurts out some smart ass comment, it effectively neutralizes every plot device revealed and makes the entire sequence feel like a joke. Subaru isn’t acting cool or like some badass, he’s friggin’ mocking the entire show and all of its characters that inhabit it. And this is the reason why I simply cannot like his character, because he’s actively mocking the fantasy world that he’s placed in. I really WANT to enjoy this show, but watching Subaru and hearing his ridiculous thinking-out-loud monologues sours the entire experience and makes each 24-minute episode a chore to get through. It’s truly a shame.

The screenshot is crappy because it’s THAT hard to find a good shot in this show. Apart from its ridiculous characters saying ridiculous things, the cinematography looks almost intentionally bad. And this is weird coming from Director Tsutomu Mizushima, who directed shows like Girls und Panzer and Shirobako. It almost feels like a poorly executed high school movie project at this point. In this week’s episode, at least, we finally get the idea that people are going to start dying off. The characters seem so inherently ridiculous that I think it’s a given that everything else that’s going to happen in this show is similarly ridiculous. I’m tempted to continue watching it just to see how bad it can actually be — something like “it’s so bad it’s good”. There aren’t that many works that actually do things like this, but I guess the maxim holds true: if you can’t be famous, be infamous. And this show is definitely, infamously ridiculous.

Just like Mayoiga, Kiznaiver is similarly crazy both in its premise and its characters. But at the same time, Kiznaiver succeeds in making its characters endearing in spite of their ridiculousness. This episode saw an intentionally “forced” sort of character development between its six leads as they were coaxed by the masochistic Sonozaki to reveal all of their deepest secrets to one another. This was presented using strikingly beautiful compositions and flavorful character moments that utilized a good amount of incidental shots to convey body language over overt dialogue. The direction is really solid, and the whole episode was pieced together quite nicely. I’m still iffy with the whole premise and where this will take our leads, but actually feeling invested in them in the first place is a good sign. I really hope Kiznaiver will become more than just a visual spectacle and deliver a pleasing character piece this season.

This show really pulled out all of the stops this week and threw all of its action wildcards on to the table. I still have some reservations about the mecha designs, but man was this episode a lot of fun to watch! The “I mistook you for someone else” shtick didn’t feel that odd once we caught a glimpse of the rocky dynamic between Yukina and Kennosuke. In fact, the two of them are actually quite adorable, and the things they say are just naturally amusing. Things are looking really bright for this P.A. Work’s anniversary special, and that’s something I’ve very pleased to see this season.

On the other end of the mecha spectrum, Macross Delta did pretty okay, I guess. There wasn’t that much action as the show took a slower pace this week to focus on some plot forwarding. The whole “initiation” setup for Freya wasn’t all that novel, but it was effective enough to create some sense of accomplishment. This show more or less has some sort of formula to follow, and it’s got those notes down no questions asked. The only thing it needs now is to rise above all of that and actually deliver something deliberately exciting. It may be difficult to trump that riot of a first episode, but I still have lots of hope for this show.

Strangely enough, Bungou Stray Dogs utilized the same “initiation” setup to introduce Atsushi to the Armed Detective Agency. Quite frankly, it felt a little contrived and underwhelming, primarily because I didn’t agree with the whole philosophy that it was trying to espouse. Covering a bomb with your own body in order to save someone is silly. It doesn’t even reflect a level of resolve, it simply shows panicked indecision and a lack of insight. Apart from this flawed logic as the basis for acceptance, the show generally feels awkward, both in its comedic beats and its overall pacing. That said, I honestly don’t think I can continue watching this show, not because it isn’t any good, but mainly because it just isn’t my kind of show. I’m sure this type of aesthetic works for others, but for now I think I’ll just leave it at that. 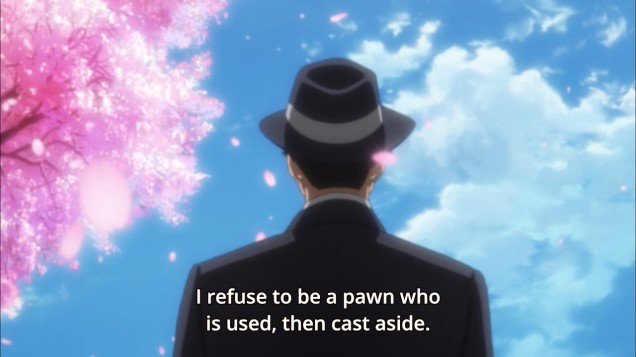 Joker Game closed its first arc quite beautifully, sending home a hopeful message that pretty much resolved a big chunk of Sakuma’s misgivings towards the D-Agency. The idea that one can serve their nation, aware of the corruption that tarnishes its reputation, but do so in a dignified manner is a very endearing message that plays true even to this day. It’s not an easy path to have to go through, but people like Sakuma are the saving grace in a time trust is no longer a luxury. The only thing this show needs to do now is maintain this level of depth and relevance, and we’ll have probably one of the best shows this season.

There were more reveals in Concrete Revolutio this week, including an explanation for Hitoyoshi’s noticeably different arm glyphs and a glimpse at the remains of former superhero team Angel Stars. I’ll admit that I felt a little distracted this week with the strange dynamics between Emi and Kiko, but I think this episode focused on identity and the ever-prevailing idea of justice, which former Angel Stars lead Haruka seems to have lost sight of. The smart use of her name (lit. “distant”) and the ambiguity of her name (having three different seasons in it) was a smart jab at the irony of her position as all she really wants is to act earnestly without the need of being told what is right and what is wrong. Overall, this was a pleasing episode with enough reveals to keep me engaged. 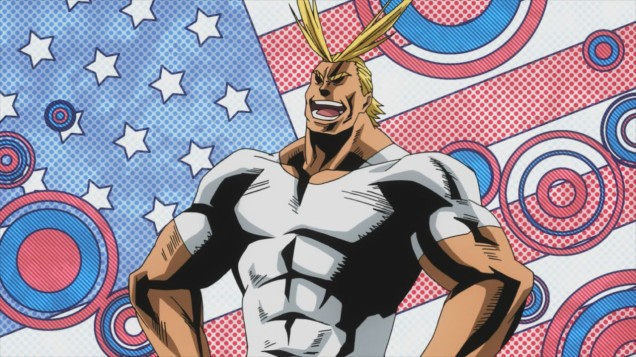 And finally, there’s My Hero Academia. If you read my review of episodes 1 & 2, then you probably already know that I just love this show. The core themes are very clear as early as the first two episodes, and we’re definitely in for a show that explores the very reason why we look up to heroes in the first place. It’s a celebration of what makes for a hero in all of us — definitely a show you should be watching out for this season.

Whew, what a lot of shows. You may have noticed that the list was shaved down a bit. In particular, Kumomiko got the boot pretty bad after bombing on its second episode. Despite that, the list is still long, and that’s even without Kabaneri of the Iron Fortress. Again, condolences go out to the people of Kumamoto for the earthquake that hit last Saturday, and I pray for their speedy recovery. Until next week, ciao!