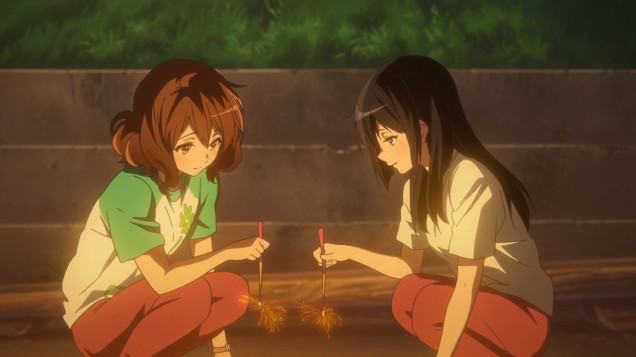 Bring out the sparklers, it’s time for WEEK 3 IN REVIEW, wohoo!

Yes, it’s kinda weird how time flies when you have fun — and boy, am I having fun. The shows this season are pretty hefty contenders, and a good chunk of them are just enjoying their time at the top spot. Of course, I’m referring to Sound! Euphonium 2. But hey, there’s more to this season than just the KyoAni house favorite. So let’s run down what’s happened this week!

This week’s episode pretty much affirmed my initial thoughts on Yuuko’s character in that she has a deeper set of values that are often misconstrued as her being aloof. She can generally play the role of tsundere alongside her silly banter with Natsuki, but this episode made it clear that her considerations for keeping the truth regarding Nozomi and Yoroizuka’s relationship from Natsuki is one born out of genuine concern. Sound! Euphonium has done a good deal of characterization throughout the seasons, but it’s nice to see them apply some depth and texture to the other members of the cast. Even Asuka’s stand-offish and scheming presence belies a deeper desire to do what’s best for the club, even if it means people will resent her for it. All the while, Kumiko wrestles with the complexities of the band’s drama whilst trying to understand the ties that bind all of them together in the spirit of competition. It’s the kind of conflict I’m pretty sure we’ve all experienced at one point in time, like in the workplace or even in a school project. Everyone can say they are aiming for a goal that is shared by the community, but how we go about achieving it boils down to who we are as people and the things that we value — which can sometimes create pretty complicated situations when those values clash. Sound! Euphonium 2 proves that it can simulate a similarly believable scenario with both grace and purpose, and I simply can’t ask for anything more. Heck, it’s too perfect for me to even complain. Just, wow, what a show.

This week’s Yuri!!! on ICE was a great watch from start to finish. Setting the stakes from the last episode and building it up to the showdown on ice was paced well enough for it to be thoroughly engaging. And indeed, much of the thanks for Yuri’s success in the rink boils down to his sincerity towards his own feelings. Many times, we lack the confidence to pursue things because we belittle our own passions — Yuri sometimes feels that what he values might not necessarily be valued by others, and so he mirrors himself in the image of Victor as a sort of pillar of strength. But Victor shows him, albeit indirectly, that the key to overcoming his insecurities is to embrace his own individuality. When he asked him to skate to On Love: Eros, he wasn’t asking him to do something out-of-character just for the heck of it; rather, he was asking him to reflect on what sexual love meant to him, and how HE would express it. Artistic expression relies more on a series of self-reflection, which is pretty much the bread and butter that this episode decided to take. But more than just this highlight on artistic expression, Yuri!!! on ICE ended on a lovely bit of characterization for Yurio, making him some kind of “rival friend” for Yuri in the future. We’ve seen lots of these type of character archetypes in many a shounen show, but Yuri and Yurio’s relationship feels more grounded — even practical — creating a wonderful dynamic between the two the allows not just Yuri, but BOTH of them to grow as individuals.

There’s a lot to like in the third episode of Izetta: The Last Witch, namely Izetta finally coming out as the second coming of the White Witch. All of this was executed using a pretty neat dramatic narrative involving a nameless corporal stuck in the midst of the trench warfare. Other hooks to the dramatic tension included the ongoing escape of Princess Finé, which was layered with scenes of a local Eldystat garrison ordering the evacuation of townspeople and a gathering of Germanian generals celebrating a pre-victory over their enemies. This thoughtful grounding of temporal events made it very easy feel the weight of each character’s actions, overall heightening the dramatic effect and eventual success of the Eldystat army. Overall, this episode was completely enjoyable, but I honestly think it could do with less of the Izetta butt fan service shots. They aren’t exactly intrusive, but part of me wonders if shorts as short as those even existed in the 1940’s. Oh well.

It seems inevitable to have to compare gi(a)rlish number to Shirobako given its take on the anime industry, but whether that be a gift or a curse, it seems to be leaning towards the latter. The second episode apparently plays the industry off as far too incredulous to take seriously to the point that the role of the producer and his influence on the animation staff plays off as grossly oversimplified. Of course, it could be argued that gi(a)rlish number is particularly focused on the voice-acting side of the equation, but one of the charms of Wataru Watari’s style is his fundamental grasp of the settings of his characters. The show so far lacks this grounding that keeps characters from coming off as mere caricatures, but I guess it’s something the show will have to work on for the next coming episodes. Regardless, Chitose’s wacky faces and generally unlikable character are on full display again this episode, and it’s nice to see how that character of hers interacts with the full cast of girls, now that they’ve been assembled. I’m generally enjoying the artistic execution and overall comedy of the series, but I feel that the show will need to ground itself quite a bit if it doesn’t want to end up like some pointless exercise of characters beside older shows like (you guessed it) Shirobako. What a cross for this show to carry.

Akiyuki Shinbo is back this week in full Akiyuki Shinbo fashion. It almost feels as if he was repressed during the premier, and in this second episode he was finally able to unleash his frustrations. A big chunk of the dialogue — especially the first part with his encounter with his rival — were verbose and fast-paced, filled with not-so-funny comedic beats that appeared more disjointed than anything. Thankfully, some characterization on Akari’s part and how she came to meet Rei are presented with wonderful visuals. And then the show then basically continues to show Rei’s complicated life situation as a professional chess player and the repercussions his wins have on the lives of other players. Competitive sports means different things to different people, and for Rei it appears to be a curse, more than anything. The shows attempts at highlighting this despair are still vividly imaginative, but poignant and believable. I think this show can benefit from a more tamed Akiyuki Shinbo treatment. Otherwise, I’m afraid there will be more rambling dialogue and questionable comedy ala- Araragi x Kanbaru.

The dream-like logic of Flip Flappers continues, now complete with Transformation Sequences and high-speed battles akin to something like Dragon Ball Z meets Tengen Toppa Gurren Lagann. But for all of the high-stakes fight scenes on display today, there isn’t much weight to the consequences of victory and/or defeat, owing to the fact that I still don’t really understand what Pure Illusion is. And in typical Shounen/Magical Girl fashion, the best friend turns out to work for the “enemy”, and the “secret organization” that plots to take over the world(s) is now one step closer. Narratively speaking, Flip Flappers is all over the place, but aesthetically and ideologically, it is pregnant to the point of bursting at the seams. I’d love to see this show do so much better, but it’s leaving little reason for me to hope for anything beyond a mess of a show. Please, please say that I’m wrong, Flip Flappers.

Yo-yo-ing its way up and down the charts is Natsume Yûjinchou Go, which in this episode fell into the trap of attempting to create a dramatic thread in an already cluttered universe of semi-characters. And I call them semi-characters because they aren’t usually present unless there is some new conflict that is brought up for them to participate in. Perhaps one of the biggest problems for this franchise as a whole is its selling point as both a series of self-contained vignettes on top of a supposedly greater narrative thread. Unfortunately, there doesn’t seem to be an end-point in mind for the narrative (given the nature of the source material), hence it reincorporates its characters in ever-recurring, new conflicts. It’s the pitfall of any show that claims to have many sequels, and is one of the reasons why I think Natsume Yûjinchou would do better to follow in the footsteps of shows like Mushishi and just focus on small vignettes with some recurring characters. The result is that this season feels like a forced extension of dramatic conflicts that don’t even add up to any narrative momentum. It’s just another new battle for Natsume and friends, and it’s a battle that I unfortunately don’t really feel that invested in.

BBK/BRNK: the Gentle Giants of the Galaxy

Shuusaku ain’t such a bad guy after all. More Shounen goodness for a show that is practically all over the place. But I’m not setting any high expectations from this show, anyway. There was a nice little round-up with Azuma’s gang where they beat up all the members of the Taiwanese Bubuki group. Otherwise, this show pretty much tried to do a little flashback and role-flipping; in other words, underscore the fact that Reoko is framed as the bad guy when she’s actually good, and hey, Kauruko gets to ride in Entei–that can’t be good. It’s as predictable as it is bad, but whatever.

I’m really not a fan of the execution of this show. Non-linear storylines are fine and all, but when they’re coupled with a slew of disjointed cut scenes, the result is confusion and disengagement. And I’m not saying this stuff is hard to digest — I’m just saying that I’m totally uninterested in the drama that is unfolding. That is, if I look at it in the way that they are portraying the story. There are several ways I can imagine myself enjoying this type of story, because from an objective standpoint it actually IS quite interesting. But the current presentation, in my opinion, seems to undermine the basic premise of the show, making it come off as campy to the point that I can’t take it seriously. I feel like I need to switch mindsets if I’m ever going to really enjoy this show — but that feels like too much effort on my part to even attempt.

And there you have it! This came out a bit early because I’m going to be a little busy over the weekend. I still have a review article that I’m working on (I’m such a procrastinator), but I’ve also been thinking about writing down some thoughts on the anime industry — specifically on voice acting and translations. This, of course, was inspired by gi(a)rlish number, on top of the fact that I have my own reservations about how shows are translated into the English format.

So that said, enjoy the weekend. This season isn’t letting down on good shows, but I hope next week will still keep up with the trend. Ciao!