As usual, these are ranked top to bottom, with a tl;dr in bold for your convenience. So with that said, let’s do this!

I think I’m not alone when I say that Made in Abyss is a strong contender for best show this season. The story depicts the ambitious journey of one Riko and a mysterious android Reg as they descend through the depths of a great Abyss in search of the former’s missing mother. As an fantasy adventure, coming-of-age story, the entire world of Made in Abyss is a fully-fleshed, beautifully animated visage that is a treat to watch unfold. Not only are the animation notes on point, but the character beats and idiosyncrasies are highly nuanced, highlighting the peculiarity of the world and the way the abyss affects the psychology of the many people drawn towards its mysterious appeal. From a story-telling perspective, it has all of the basic elements that make any fantasy adventure story functional enough to be engaging without having to dish out outlandish plot beats to secure any attention from the viewer.

If you enjoy classic fantasy adventure story telling, complemented by beautiful visuals and charming characters, then this is the show for you. If there’s anything about this show that I feel a little uncomfortable with, it’s in its tendency to place Riko in circumstances that force her to be unclothed. Although not leery or suggestive by a long shot, this is something that clearly doesn’t HAVE to be around, but I guess doesn’t detract from the overall charm of the series. Still, no one’s perfect, I guess. 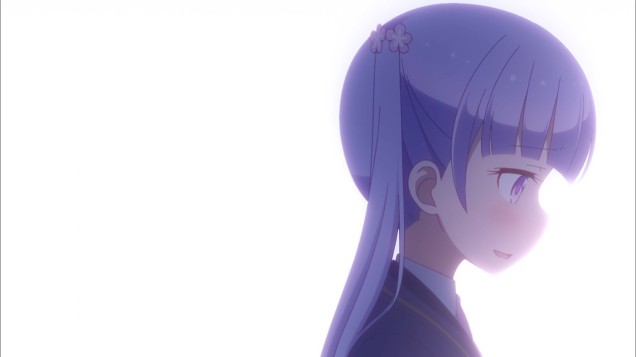 NEW GAME!! is the follow-up season to the Summer 2016 show that depicts the pseudo-adventures of one Aoba Suzukaze as she makes her way up the corporate ladder as a bubbling character designer in the Eagle Jump video game company. Originally a slice-of-life comedy depicting cute girls doing cute things in the video game industry, this show has steadily evolved in many interesting ways to become a character-introspective show with reasonably sound dramatic beats that help heighten its overall appeal. On that note, it’s actually quite impressive how the inclusion of any form of drama doesn’t dampen down the otherwise light-hearted nature of the production. In fact “balance” is perhaps an understatement as to just how well this show is able to capitalize on its characters and make them charming to bits. All of this is elevated with the excellent animation notes by Doga Koba and their flavorful use of subtle animation cues that home in on character idiosyncrasies and make everything just feel ooh so good.

If you like watching cute girls doing cute things but there being an actual goal in mind, then this is the show for you. And oh yeah, there are some elements of yuri pairing, if shipping is your thing. The first season may have been a passing thing for me, but this second installment has definitely become a sort of must watch for anyone who fell in love with this shows characters early on.

If you’re expecting a digest of this series in a single paragraph, then sorry. It’s quite difficult to summarize just what sort of hodgepodge of a work the monogatari series is, but it is essentially an omnibus collection of several stories that look into the misadventures of one Koyomi Araragi as he navigates his supernaturally inclined adolescence by battling alongside apparitions, including vampires, ghosts, and a veritable zoo of mystical creatures representing features of the occult and the human psyche. It’s a deconstructed exercise of self-examination that utilizes similarly abstract methods of presentation, including full-out monologues and wonderfully inventive visual exercises care of Akiyuki Shinbo, himself. Owarimonogatari (ge) rounds out the second half of the Owarimonogatari story arc, which outlines the final events leading to the end of Araragi’s lived experience as a half-vampire, half-human.

Short of spoiling everything for you, this is certainly one show that requires several viewings to get, as well as several re-rewatches of previous arcs in order to piece everything together. On that note, it’s somewhat odd that studio SHAFT opted to air this work in two separate cours, but I guess we’ll just have to deal with it. If complex character dramas with a heavy reliance on dialogue, visual flare, and the occasional splash of fan service are to your liking, then this is the show for you. This is a hit or miss title for most, but if you’re anything like me, this is definitely a must watch.

When it comes to comedy, no one does it better than old school. That’s probably my age talking, but it goes without saying that Magical Circle Guru Guru does double-duty in serving both the nostalgic bone for a series that is well over 20-years and running, while at the same time remaining fresh and vibrant in the post-bubble era of anime that is 2017. It takes quite a lot for a show to overcome the ravages of time, but a story that revolves around ridiculing the very essence of classical JRPG sensibilities rings true to any an old-school gamer. Even for younger gamers, I believe, there’s enough nonsense in the humor of this title to ring true, to some extent.

If old-school comedy and animation focusing on video gaming tropes and parodies is your thing, then this is definitely the show for you. It’s only hampered by its sometimes noisy slapstick and occasionally awkward toilet humor, but that’s the price of admission for most parodies at this point. And not to mention the odd habit of this show to over-sexualize Kukuri whenever it feels like it, but Kukuri doesn’t seem to care about it in the least.

#5 – Welcome to the Ballroom 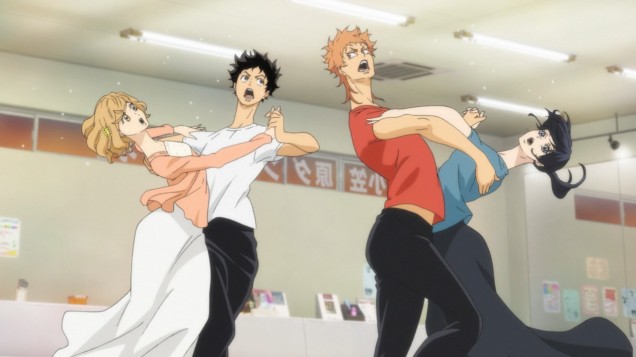 We’ve always seen that one scene in an anime where the protagonist is asked to fill up a career assessment form, only to end up as some excuse for them to engage in whatever theme/plot variable the entire series hinges on focusing on. That’s basically the gist of Welcome to the Ballroom where one Tatara Fujita winds up wanting to learn ballroom dancing after being enamored by the passion of fellow dancers his age. Throw in the testosterone-driven antics of overly-drawn male rivals, and that’s the sort of sports drama schtick we’re dealing with.

To be honest, I’m not totally sold on the characters of this show, and much of it probably has to do with the way the show maintains its framing through the eyes of Tatara the rookie. But other than that, the dramatic tension and visuals are nothing to sneeze at, dishing out a unique blend of bold strokes and exaggerated body proportions that adds to the overall flavor of the show. If one-beat sports dramas of a rookie aiming for the big time interest you, then this is the show for you.

Kinda weird that I only have five new shows this season, but then there’s also My Hero Academia, Re:CREATORS, and Sakura Quest in my viewing list, which I decided not to include here in order to maintain focus on the Summer 2017 entries. Although the selection is quite small compared to what we’re used to, I hope any one of these shows catches your fancy, and that you may enjoy something new to watch if you haven’t picked one of these up, already.

So yeah, from here on I’ll see if I can bring out my promised re-review articles on Owarimonogatari, or perhaps go with some editorials and reviews I have in mind. So until next time, ciao!