Straight into the gut this Winter 2017! Hell yeah, let’s start things off with a bang! Strip down to the bare essentials and just go crazy this 2017!

But seriously, there are quite a lot of interesting titles this up-coming season, and I’ve literally flooded my viewing list with well 12-odd-so titles to check. One of them is an OVA (which I will be posting a review of soon), and the other is a weird specimen that has an obscure release schedule over the year. But yeah, just as with the previous seasons, I’ll be doing my previews in a piecemeal fashion as the shows trickle in throughout the week, ultimately summarizing all my feels in a week-end rundown. If you want to see my full list of titles, do check my myanimelist for a full listing. And while you’re at it, please add me as a friend — I’d be so down to knowing how similar/different our tastes are in animu.

So this week, we have magical princesses, old-fashioned comedians, adorable seers, and hyper-powered exhibitionists. As early as the first week, Winter 2017 really is turning out to be one really weird season. So let’s run ’em down! 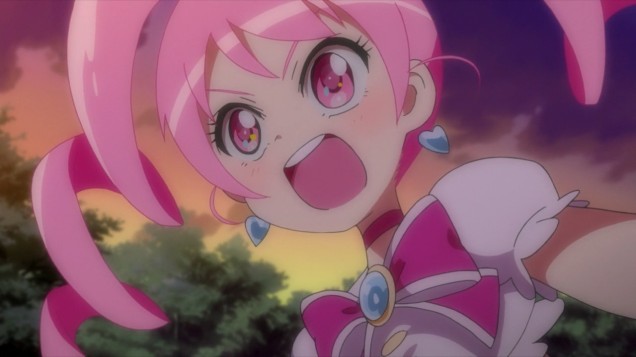 Perhaps one of the more esoteric titles out there, 6HP (Six Hearts Princess) is a conceptual series that was first brought up by director Takashi Murakami in an animators expo in Le Chateau de Versailles in France back in 2010. The concept itself isn’t so much novel as it is provocative, featuring a generic Magical Girl story that belies a more sinsiter plot. But what makes 6HP interesting is the fact that it is being helmed by Takashi Murakami, who is known for his unique aesthetic in blending overly simplistic CG designs with surreal themes. This is further exemplified by the choice of mebae as character designer, who is known for his eroticism in art. That said, 6HP may come off with themes that borderline pedophilia, with depictions that are less leery then they are, really, highly suggestive. But toss that aside and what we have is an interesting mix of ideas that lends itself to curiosity. Indeed, this first episode has the basics needed to convey general interest without coming off as too campy, and this is coming from someone who doesn’t really watch Magical Girl shows without due reason.

I watched Puella Madoka Magica only because it was written by Gen Urobochi and directed by Akiyuki Shinbo. My avatar, Miyako Gotokuji, came from PPGZ, which was based off of PPG — a show that I grew up with as a kid and enjoyed quite a bit. Perhaps the only Magical Girl show I watched without any real reason was Card Captor Sakura, simply because it was the only Sunday Morning show airing at the time, and it was also a manga that was given to me as a present, so I couldn’t help but get reeled in.

So yeah, here I go watching another random Magical Girl show just because I’m a fan of the director and the character designer. That’s just great. But in all seriousness, I think this pilot episode will be highly polarizing for most people. Not to mention the fact that this show has been through a bumpy ride towards production. To cut things short (since this is getting pretty lengthy), the original plan was a full 3DCG production, but due to some constraints, they settled with a traditional anime with 3DCG segments. Then there’s the fact that this isn’t even complete, and it was purposely aired incomplete to deal with audience pressure — so don’t expect the next episode to come out until next season or something like that. So yeah, this one’s quite the oddball this winter. Initial Rating: 6.5/10

Whew, that was a mouthful to say. Coming out precisely one year after its original run, the second season of the highly acclaimed Shôwa Genroku Rakugo Shinjû continues its story, now focusing on the present-day events of protagonist Yotarô now dubbed “Sukeroku” and his attempts at paving the way for a modern era of Rakugo. To the uninformed, Rakugo is a form of traditional storytelling wherein the performer acts out a story in front of an audience. The stories are typically humorous in nature, panning out with the use of a variety of characters to which the performer adjusts their intonation and mannerisms, accordingly. The first season of the show presented itself as a backstory of Kikuchiho, the current president of the Rakugo society and how his dark past formed the cynical man he is today. This current season follows the story up to the present day, and how his disciple Yotarô is now faced with the gargantuan task of maintaining the relevance of the art in the modern era.

I really appreciated the way the show opted for a Rakugo performance in order to summarize the season that came before it, but the performances in this pilot episode seemed a little underwhelming. Perhaps this was in favor of setting down the overall tone and direction of the current story. And that direction is, inevitably, a discussion on the relevance of tradition in a modern society. It’s a tricky theme that is actually well embodied in the tradition of Rakugo, or any traditional art for that matter. How it takes this theme will definitely depend on how well it balances this theme with its overall story, since this show has always been a character-driven narrative than a show with an overarching political message. Regardless, I’m a very happy camper to be able to watch this show again this season, and I’m anticipating a very satisfying show for the coming weeks. Initial Rating: 8.5/10 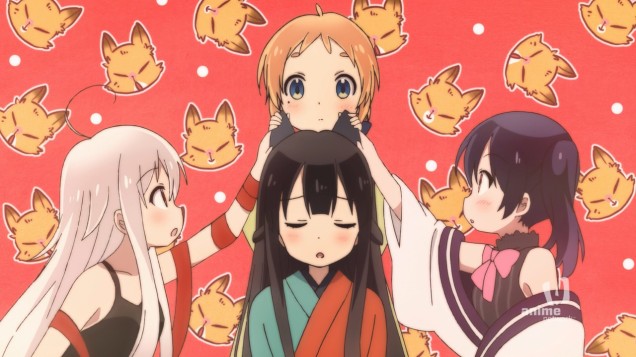 I sometimes pick up shows expressly for their cute-factor. This is precisely why I decided to watch Urara Meirochô, and boy was I not disappointed. The premise is simple enough: girls from all over Japan come to the city of Meirochô in order to become diviners called Urara. This story follows the adventures (and misadventures) of four young girls striving to become Urara themselves.

Granted you can pretty much create any pretext for cute girls to do cute things, Urara Meirochô checks out on almost all fronts with regard to fulfilling even your basic needs for a slice-of-life comedy that is just ridiculously cute. Even with its tropiness in tow, the show does well in making its characters endearing early on, associating their unique idiosyncrasies with their own preferred method of divination, as well as characteristic speech. I personally liked Nono’s talent at ventriloquy that effectively upped the cast to 4.5 characters. But that said, there are some gags that feel unnecessarily dragged out, like Chiya’s repeated cat-like gesture of showing her belly whenever she has to apologize. It doesn’t help, either, that the goal of such banter has a more fan-service oriented reason than anything.

So although this show is pretty pointless, it does well on its pilot screening to lay down the bare essentials of what could possibly be a fun ride. I won’t say it’s at par with shows like NEW GAME!! just yet, but we’ll see how far it goes. Lastly, I couldn’t help but think of remy during the entire screening and just how many ships there are for him to enjoy in this show. Initial Rating: 7.5/10 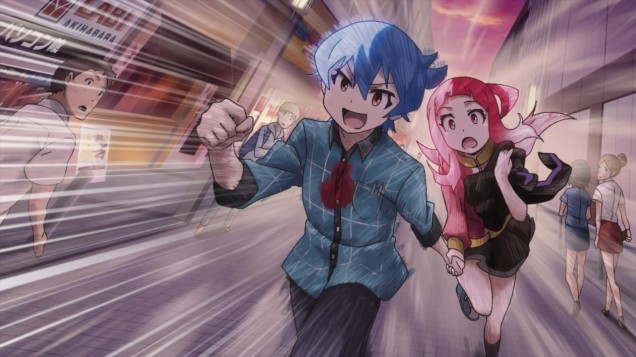 To be honest, I haven’t played the game enough to make an informed comment on this show, but I know for a fact that the general premise was based off of a stupid pun. To reflect that knowledge, I purposely wrote the title the way it’s supposed to be written. But who are we kidding — this is a show that justifies stripping people down to their undergarments in order to create a premise. It’s similar to how Strike Witches justifies its trouser-less cast by pointing it out as a matter of convenience.

But the pilot episode for AKIBA’S TRIP is no less than esoteric, throwing out wild ideas without any rhyme or reason. And there’s nothing really wrong with that, other than the fact that the concept itself doesn’t really appeal to me. Although I do give it props for using Otaku stereotypes in a flavorful manner that actually ends up being a little funny. It’s the tightrope that made Subaru from Re:Zero detestable, but in the case of this show, actually makes Tamotsu pretty amusing. For example, although this was something lost in translation, his retro-gulf war-inspired cellular phone was actually called a “smart phone” by Matome. I mean sure, you can insist on not wanting to be treated like a member of the mob cast, but going so far as fashioning a smart phone out of a post-war relic was a nice meta joke.

In the end, it was a trashy premier show that obviously caters to fans of the existing franchise. I’m somewhat not surprised that GONZO decided to rise up from obscurity in order to create this fan service-crazed monstrosity. Their dedication for raunchy titles is at par with XEBEC at this point, but at the very least they do the theme justice with awesome animation sequences. So for all intents and purposes, this show actually achieved what it was meant to achieve with flying colors. Unfortunately, for me, that means a show I’m more than willing to skip for this season. Initial Rating: 6/10

EDIT: fun realization — Matome suddenly regenerates her skirt in the last sequence after Tamotsu grabs her hand and runs away with her. Hmm…

What are you guys planning on watching this Winter 2017? Do let me know in the comments! So until the next bunch of previews, ciao!