Whew, that was a hectic season.

The latter half had me leaving on a trip, and even these last few weeks had me rushing to clear up the backlog, only to find myself in Edinburgh for a week for yet another conference. That and the fact that the Nintendo Switch came out and basically ruined the lives of many a gamer with what could perhaps be regarded as “one of the best video games of all time”.

Regardless of whatever obstacles there were to be had for me this season, I was finally able to get it over and done with. Nine shows neatly tucked away — save for two that will be carried over to the next season — and for this season-ending post, I decided to go ahead and include on-going series to the listing.

Overall, I think this season was pretty ho-hum. It wasn’t really strong to begin with, and most of the shows pretty much stayed within the general spectrum of expectations. Nothing to flashy and nothing too dull, either. Just… mediocre, I guess. So sit back and relax as we run down the shows I watched this season!

It’s a shame, really, that I had to place this show at the bottom of the list. It had a great premise and actually had some nice little bits of reflection that were relevant to the themes it supposedly espoused. That was until it started wading into fan service territory and blatant student-teacher-haremesque setups. It’s tropey, if anything — and as I’ve always said, that’s not necessarily a bad thing. Sure, it can be fun — but all of this simply undermines the sincerity of the message of the show, which focuses on the minority and the ways in which we strive to understand one another more and more. This concept of understanding one another is actually a common theme in the shows this season — all the more why this show, in particular, paled in comparison to its other cohorts. Again, it’s a shame — but what’s done is done, I guess.  Final rating — 5/10

To be honest, I think much of my disappointment in this show has to do with the fact that I haven’t played Tales of Bestiria. I’m pretty sure there are tons of references and hints that came across to me as cryptic through the show’s duration, but that doesn’t excuse how this show decided to back down on the tension through some exposition come the second to the last episode. Not to mention that they’re delaying the final episode till the 29th of April for whatever reason (maybe it has something to do with the game release or something? I dunno, I can’t Google). I’m not really against using Anime as part of a multi-media marketing strategy per se, but at the very least, I think productions as grand as this deserve to stand on their own. That said, the entire show has been pretty much mediocre at best despite its otherwise impressive visual presentation. The story plays out like a generic JRPG (which is good to some extent), but the urgency of its plot feels rushed, if not somewhat contrived. I dunno, I’m just not sold on this entire thing. Maybe if they kept it as a video game, or at least tried to make the exposition a little less messy by focusing on plot elements like what the hell the war between Hyland and Rolance really is all about — maybe I could’ve appreciated it better. Otherwise, this show has been a hot mess from start to finish. Probably something only a true fan of the franchise could come to appreciate.  Final Rating — 6/10 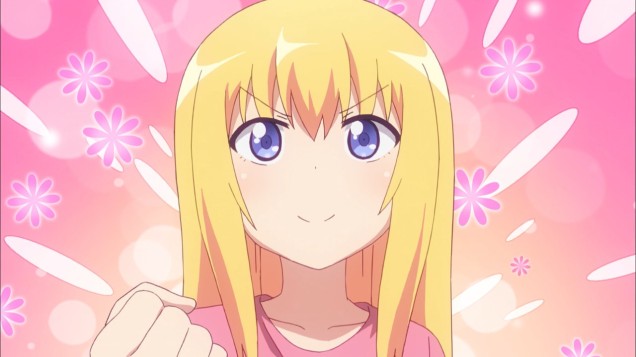 I know I might have been a bit hard on this show throughout the season, but believe me when I say that this show made a believer out of me (pun not intended). But only to the extent that its main heroines were pretty much endearing enough to make me feel sad that the show had to come to an end. I still uphold the belief that many of the gags were somewhat uninspired and predictable — the show not utilizing its plot and settings to the fullest — but where this show shines, really, isn’t in its ability to create comically inane setups. Instead, this show is enjoyable for the fact that its characters are simply fun to be around. This is a hit-or-miss title for sure, but I’m proud to say that whenever it did hit, it hit me pretty darn good.  Final Rating — 7/10

This show certainly was the hodgepodge of genres, seemingly justifying itself by mashing all of the scenarios it can muster. Regardless, the message of understanding others and our innate desire to connect with one another makes this a wonderful, albeit short slice-of-life this season. Its conclusion feels eerily similar to a vintage anime in the 60’s that I watched involving these children and a genie of some kind. Although the ending of that show was much more depressing, Miss Kobayashi’s Dragon Maid ends on a sweet and empowering note that challenges the age-old motif of choice. If it were not for this show’s clarity of purpose (which I amusingly challenged in its earlier episodes), shows like Demi-chan wa Kataritai might have faired better. This was far more earnest in its message, singular in its execution, and overall just wonderful to have seen unfold. Color me surprised, but not bad Kyoto Animation.  Final Rating 7.5/10

I think I wasn’t as impressed with the show this season given how scattered its scenarios felt over the various characters. As much as I liked to believe that Yakumo’s “tragedy” was to be explored in the present day, the story turned out to be a far larger cobweb of broken human relations that basically culminated in a whole “you can’t kill the craft of masters” sort of schtick. I’m sure I’m missing something here, probably because I was rushing to finish the shows; I guess my point here is that the sequel didn’t have me as engaged as the first. The first season felt like it had a more classic, stage play-like tragedy feel to it. This second season, on the other hand, felt more like a forced continuation that did little to add to the magic of its predecessor.  Final Rating — 7.5/10

I’ll be honest — I’m a bit biased with this one. But one of the reasons why I really, really love Little Witch Academia is in the simplicity of its message, whilst balancing the honesty of its delivery with its otherwise light-hearted fanfare. In the strictest sense of the word — so as not to offend people who tend to clump Japanese Animé into a specific genre in and of itself — Little Witch Academia IS a cartoon. The use of overly exaggerated deformed characters to emphasize humor and comically non-sensical plot flows attests to this fact. Regardless, it just works — even as an anime. Very rarely do we find a marriage of Western and Eastern animation philosophies to produce something this special. Though it’s a shame there are many instances of dips in animation quality here and there, this doesn’t change the fact that I am just enamored by Akko’s tenacity to achieve her goals amidst a world that tells her otherwise. Her underdog tale is as classic as it gets, but the show’s ability to keep this overused story handle fresh and engaging is nothing short of incredible.  Current Rating: 7.5/10

This show was good — or at least its conclusions were. I know I’ve been singing its praises the whole time this season, but on retrospect, I realized that the glaring flaw in its execution keeps it from getting a perfect score. And that flaw is that it relies too much on exposition and outright character narration to bring about its dramatic reveals. Perhaps this is the reason why the visual direction looked more like a bunch of manga panels than an actual show with a visible drama. But even then, it felt a bit lazy — almost like reading out the reflections of characters instead of figuring them out for yourself. Regardless, these reflections were poignant and wrestled heavily with the journey of broken individuals searching for genuine human companionship. I can complain all I want with regard to the visual presentation and overall execution, but I can’t for the life of me complain about what these characters have been through and the sort of mental torture they had to endure. These are real emotions with reasonably sound mental choices that reflect their individual idiosyncrasies well — and such honesty and brazen disregard for established dramatic tropes was totally refreshing. Just a bit shy of a perfect score, but a great show nonetheless.  Final Rating — 8.5/10

I feel bad that my weekly shares of Lotta has come to an end, but by golly this was one heck of a show. To be fair, the entire show was rather simple in its premise — the exposition and revelation proceeding in a rather steady pace — but I think it’s this simplicity that makes its message of unity in diversity very clear. It’s a fitting message in a time where nations are steadily closing themselves under the guise of nationalism; like walls to deter terrorism when the real terror is in our inability to address the atrocities of war in a humane manner. Where there seems to be no alternative other than a coup d’état, ACCA shows us that there is always an alternative granted we remain open and not shut ourselves in like the crowned prince did. And even the show’s conclusion is met with a sobering sense of loss — that not all people can accept “unity”. But that’s fine — in the end, it’s the honest desire to become united that drives the kingdom of Dôwa to unite its peoples in spite of their differences. This was a fabulous show from start to finish, and one that I highly recommend people (and politicians) to watch.  Final Rating — 9/10

I think there’s no arguing that March comes in like a Lion has been one hell of a ride. The show’s depiction of Rei’s tumultuous journey towards self-enlightenment is both poignant and beautiful. Depression is always such a tough topic to deal with, but it is something that needs to be addressed — and yes, this show addresses it with both sensitivity and grace. I really can’t find any reason for people NOT to watch this show. It’s is beautiful — rendered to the style of the impressionist artists like Claude Monet and Vincent Van Gogh — and masterfully directed under the helm of Akiyuki Shinbo. And to make things even better, it’s apparently getting a second cour — something I’m definitely pleased to hear given we still have no closure on Kyouko’s story. If there’s anything to complain about in this show, it’s probably the randomness of Shinbo, which tends to make scenes noisier than they should be. The final episodes also seemed to drag along as if attempting to fill in the void after the closure of Shimada’s arc. Regardless, this show has been a masterpiece from start to finish — a fitting show to be crowned best show for Winter 2017.  Final Rating — 9.5/10

Whew, it’s been a while since I’ve written anything, and to be honest I feel a bit rusty. But it feels good to put thought to screen again, and I hope to bring you guys some previews from the upcoming season soon. Suffice it to know that there are A LOT of shows that have piqued my interested — and I simply can’t wait to share with you what’s on my mind. So farewell to Winter 2017 and hello Spring 2017!